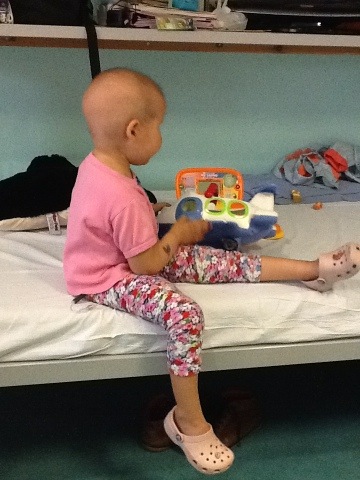 Today was a GOOD day! Yes, it was. Vega has had no fever today. Her ct scan came back all clear. she has had a good appetite and ate, even if she had mostly crisps. She has also asked to go to the playroom often today and we had a few opportunities when everyone was busy with breakfast or dinner to play. Vega got a Hello Kitty nearly as big as herself from her Auntie Connie. She really was quite happy today.

Her white blood cell count and neutrophils are still really low, they actually came back as “undetectable”, but her red blood cells were good after last nights transfusion and her platelets are going up by themselves. So all of this gives me hope that we might finally be over the worst. She is still one the same cocktail of antibiotics and antifungals and these will only be stopped when she is fever free for at least 48hrs. She will then receive some other antibiotics for another 10 days or so, to take home. I am suspecting that they want to keep us here until her neutrophils are showing a trend of recovery. I have no idea when that would be but the fact that the platelets are going up is a good sign. Usually bloods start to recover 10-14 days after chemo, and Vega’s last chemo was last week Tuesday so we are on day 11. But this last block was tough and Vega has been very neutropenic for over 10 weeks now, meaning recovery might be slower. Vega was due to start the next block of chemo next Tuesday but it is more than likely that this will have to be postponed. It would have started with a bone marrow aspiration and Vega is not even well enough for the general anaesthetic.
So a few more days for us here in isolation. Last week was manageable because Ray actually took the week off and we did a sort of tag team parenting, one of us here, one of us at home. On Monday Ray is back at work so I will be madly scrabbling for babysitters again and I have no idea when I will see Lyra next. Let’s hope we are out of here sooner rather than later..

I want to say thank you for all your messages, comments and hugs/pats. They help! A lot!